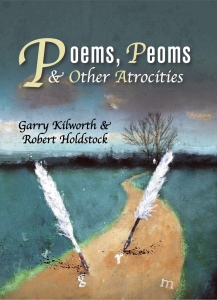 A selection of poetry from Rob Holdstock and Garry Kilworth.

You can purchase the book from the PS Publishing web site.

Rob’s partner Sarah Biggs had this to say about the collection:

“Rob derived a huge amount of pleasure from writing these poems (and ‘peoms’) in the last two or three years of his life. Some were written purely out of fun and mischievousness, but some had very serious intent (such as ‘The Field of Tartan’ and ‘The Passing of Alpha’). He sent multiple versions to family, friends and acquaintances for feedback and relished the ensuing discussions and chats about them. They undoubtedly provide fascinating insights into ‘the real Rob’ and are, by turn, profoundly moving, thought-provoking, sad, funny, crazy and wonderful.

As Garry notes in his Introduction, many of Rob’s poems were ‘as elusive as snow leopards’. I have tried to track down as many as possible—I am sure many more will be lurking in long lost emails and notebooks—and I have also tried to second-guess which versions might be ‘definitive’ but concluded that some were probably ‘works in progress’. Apologies from a celestial Rob for this, and from me for any inaccurate transcriptions!

I should like to thank Garry, Pete and Nicky (and all at PS Publishing) for initiating and producing this handsome volume—and to François for the beautiful cover. Rob would be absolutely thrilled, as am I. He would also be exceedingly pleased and proud that his poems are published alongside those by Garry, whose work he admired greatly… and who was, and continues to be, a very special friend to us both.”