I was very surprised, and of course very pleased, to receive an award (Prix Imaginales) for my story “Scarrowfell”, which was translated into French by Philippe Gindre and was one of seventeen of my SF and Fantasy stories collected by Gilles Dumay, of Denoël, and published in a single volume (Dans la Vallée des Statues et Autres Récits).

I hadn’t even known I was up for the award. I was sitting in the audience at the Imaginales Festival (May 2004), next to Anne and Stan Nicholls, when I heard a familiar word (the title) in the rapid-fire French of the presenter. Silence followed, the entourage on the platform gazed expectantly at the audience, and Anne Nicholls prodded me in the side: “That’s you! Get up there!”

The prize was a large and beautiful piece of ceramic sculpture, and incredibly heavy. It was presented to me with ease and I nearly dropped it, just managing to keep my grip on it. Everyone on the platform laughed. They thought I was making a joke. I went along with the laughter, heart still racing. But I’m doing a little more weightlifting now. (Using the award of course.)

I tried to remember when, where and for whom I’d written “Scarrowfell”. Then it came back to me: Mid-80s, London, for myself as editor of Other Edens. It was a slightly blush-making moment. Ah well.

In fact, the piece was first written for a Hallowe’en reading at Christopher Priest‘s. He hosted several Hallowe’en evenings, and sometimes the stories and the atmosphere were truly spooky. Martin Rowsen read a super story, about a man who sweated money. Chris Evans, I recall, tried us out with a story concerning the delicate, painful, but hilarious subject of ‘vaginismus’. Unpublished, I think, and that’s a shame! There were others, all highly entertaining. 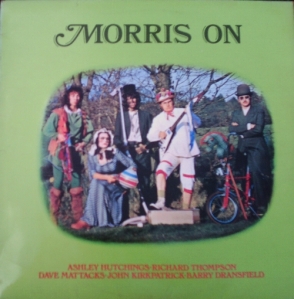 I was in the middle of my ‘mythago’ period at this time, and was listening to a great deal of European folk music, especially British. I’d found a ‘Morris’ album Called Morris On, featuring such stalwarts of folksong as John Kirkpatrick, Richard Thompson and Ashley Hutchings, which was huge fun to listen to — occasionally. One track – ‘Lads a’bunchum’ — contained the words, “Oh dear mother what a fool I’ve been, six young men came courting me; five were blind, the other couldn’t see; oh dear mother what a fool I’ve been…”

I liked that. The words were resonant and haunting. And they inspired a story. On the Hallowe’en night I read the piece and between sections played the Morris music for effect, a sort of ‘radio’ performance. It went down quite well. 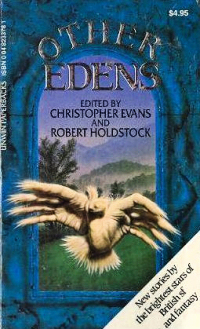 Chris Evans and I were plotting an anthology series at that time, and soon after that evening, we received the commission from Jane Johnson for Other Edens. I rewrote the story and slipped it in among excellent pieces by Tanith Lee, Brian Aldiss Mike Moorcock, Garry Kilworth and many others. But I never thought of the tale, thereafter, except to sell it to the Magazine of Fantasy and Science Fiction. When it was published there, I received several very angry comments by people of a nervously religious disposition. You’ll see what upset them when you get to the end of the tale. I was astonished at the objections; but then… I worship at the roots of trees!

I’ve always believed that any story, though written in its time, is not necessarily best appreciated in its time. Sometimes it has been written too late, sometimes too early. “Scarrowfell” was written too late for an English audience; but it’s interesting and encouraging to find that, perhaps because of its very parochialism in a broader-minded European age (and therefore its historical and cultural ethic) it’s of its time in France.

Anyway, here it is in the original.